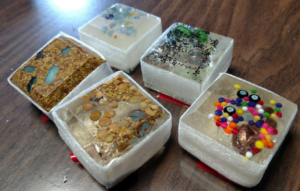 As a Farm Educator, I am always happy when we can get into the classroom and support teachers. So I was thrilled when Ms. Wolfe, a Science teacher at REACH! Partnership School, invited me to do a lesson with her classes reinforcing the photosynthesis lesson they had recently completed.

When I was still a student, one of the projects my dad did with me was to create a plant cell replica using epoxy and items from around the house. In thinking of what would be a fun, hands-on way to reinforce some of what the class had been learning about photosynthesis I immediately thought of the plant cell replica project I’d done with my dad.

The day of lesson, I had each class break into smaller teams. Each team was given a cell diagram and chose a chemist, a scribe, and a team representative. A few groups had several people competing for the same role, so disagreements were settled by playing rock, paper, scissors.

Each team had to collectively choose 3 plant cell organelles including the nucleus. The team representative gathered beads, seeds, and candy to represent their chosen organelles and the scribe was responsible for documenting their list of organelles and how they were represented. The chemist was invited to the front of the room where we had gloves, safety goggles, measuring cups, mixers, epoxy, and a silicone mold. Each chemist got to measure out their teams epoxy and hardener, mix them together, pour the epoxy into the mold, and then drop the organelle representatives where their team wanted them to go. As the epoxy solidified, each student was able to feel the bottom of the mold releasing heat and this allowed us to discuss chemical reactions that create energy and how the epoxy mixing with the hardener is similar to photosynthesis; a chemical reaction creating energy.

So… my reflections on this experience and what I’ll take away. I love that overall the vast majority of the students were thrilled to do “hands on” science.  I love that I got to introduce them to new vocabulary and that the students were eager to learn it.  I love when students work together in small teams towards a common goal and settled disagreements through the time honored method of rock, paper, scissors. I love the way the plant cell replicas came out, how different they are, and how each variation reflects small differences in the teams. One chemist stirred so quickly that the air bubbles couldn’t escape before becoming a permanent part of the plant cell replica. Another student took a lot of quinoa to represent an organelle and it is striking against the blue beads he picked to represent a different organelle. I also love the perfectly clear replicas because later chemists were dedicated to following the directions specifically and stirred extremely slowly.
One student walking away down the hall confided to me that “it was actually pretty fun.”  Personally, I’m hopeful that all of our educational presentations are as “pretty fun” as this one.